He held the world in his hands
As he crooned the last notes to the sea of nameless faces
The bright lights swiveled on his slim form
His sweat glistened from his glorious mane
He was the newly crowned prince of the rock world
Amidst the crowds and adoring fans, he felt powerful
His mind rocking with the pulse of his raging music
He went into the back room of the stage
What he saw made his stomach curl and bile rise up
His girlfriend, Diane and band mate entwined limb to limb
Her face caught in passion’s fury, her luscious lips
Moaning as her lover licked her breasts, his hands
Cupping her legs, bringing her to mindless pleasure
He felt his heart blown into a thousand splinters
The very same lust and hunger that drew him to her
Now disgusted him, and made him remember Dorothea
Grabbing his most treasured possession, his guitar
He left the concert grounds and drove
Around in circles until  he saw with clarity
His path ……the yellow lines on the road
led straight to a red brick house with a rusty mailbox
Getting off his gleaming car, he paused to peer at Dorothea's house
Seeing its steadfast points, noting its tranquil lines
His last image of it was slamming the door in anger
Her, the anchor in his rocky and turbulent musicscape
What a fool he was to let her slip away!
He rang the doorbell not knowing what to say
All he knew was that he wanted to grovel at her feet
And beg her to take him back.
He took a deep breath as the door opened
Dorothea saw his earnest face bathed in the moonlight
It was the boy who gave her roses for her birthday
The awkward teen who tied her prom corsage on her wrists
The young man who composed love songs just for her
strumming the guitar, and playing with her heartstrings
The rock star who wanted his freedom.
Kneeling down, he took his guitar, the soul of his music
And placed it at her bare feet, his eyes shut tight
Bracing himself for her sharp words and blows
Instead he felt her gentle hands on his hair weaving like the wind
Her hands drew him close unto her breasts
Like a prodigal lover, he wept in her arms
Forgiven, he held the world in his hands. 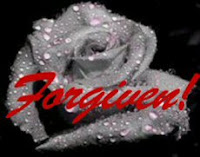 Author's Note:   This story is for Romantic Friday Challenge:  Forgiven.   The challenge is to write 300-400 words with the theme or word Forgiven.   Do check out the others participating this week.
The story is based loosely on a rock star's love life.   After catching the woman with his band mate, he went back to his high school sweetheart to “grovel at her feet”.   They got married soon after and until now, are still making beautiful music together.
Posted by Scarlet at 16:02