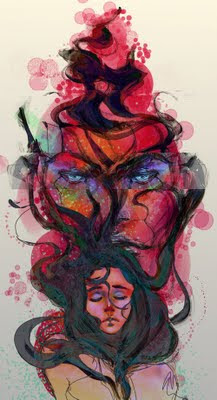 The whispering started on a lazy sunday afternoon
when cleaning their abode, she came across
a stack of letters bunched in an elastic tie in his drawer.
Curiosity, with righteous pinch of a newly minted wife,
made her take out the tie, and unfold the papers.

Dusting away her palpitations,
she began reading each letter, then another.
As the words of love and admiration flowed out,
she clutched her breast hoping her heart doesn't fall out.

The voice in her mind grew louder
torturing her for being a fool,  fool !  stupid !
The letters were from his best friend,
or was it from a lover's hand?
Was she deceived or their friendship more than that?

Fool !  stupid ! blind fool !
She didn’t have the guts to confront him that day
allowing the whispering in her mind
to torment her days and nights
until she became a nervous wreck.


After their second month wedding anniversary dinner,
she mustered the courage to confront him directly.

Placing the letters neatly on their bed, she said softly,

"I was cleaning the drawer when I came across these.
What is this all about? “

"Oh, that.." he grinned.   "Bob is like that; we write
to each other like we are each other's muse to our writing.
We exchange ideas, and this is his way of responding to my writing."

She looked at his earnest face, and nodded her satisfaction.
It’s fine. You misunderstood the situation.

She embraced him, hushing back
the other voices dancing in her mind.  Lies..Lies !.
He rained kisses on her face and breasts.
Pushing her to bed, he made love to her fiercely
and even roughly.  With sweat running down his muscled body,
he exuded confidence and pride in his manhood.
He made her forget the letters that night, and nights after that.

The voices in her head had quieted down to an occasional whimper.
She tried hard not to let the seed of doubt bear fruit
specially when she sees him laughing at Bob's jokes
or just enjoying his best friend's company.

For her peace of mind,  she burned the letters with his consent.

Besides, there was no real reason for her to worrry.


Author's Note:   This post is for Friday Romantic Challenge - Voices.  Write a story in less than 400 words with voices as the theme.  This story is based on a real life experience.
Missed out last week as I was writing challenges for the poetry communities.  Joining you this week ~
Posted by Scarlet at 07:35