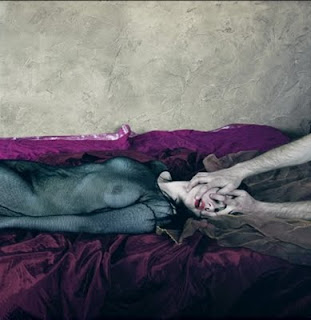 Pale hued attired, I rested on her lap.
Her hands would shield my fear and my despair
when echoes there would drip between the gaps
of cries through empty walls; down halls that scare
a child who aches who feels she's trapped in lairs
ignored where she'll lie lonely shrivelled dead,
the flames consume the corpse that's in her head.

Author's Note:   This post is for D'Verse Poets - Form for all.  Gay has shared a form, Rhyme Royal and requested us to post a poem following this form.   She has kindly edited my original post (see below and her notes) into a perfect iambic pentameter.  This has been a challenge for me as I don't normally write with a form in mind; but learning the form has been interesting.
Comments from Gay:
Let's take your poem apart, shall we?  It's not hard to do. This is NOT rocket science.  It's an antique thing  (and I mean back to the Greeks) called scansion.  Since the Greeks held poetry in such high esteem (see Aristotle - Poetics), it was possibly they who came up with music in the words.  They had lots more rules about it than we have in English.
So, this form (rime royal) has a rime scheme of ababbcc we can look at your end sounds and check that -
lap, ing, until, then, scars, dead, cremated
So you have some of the scheme but you miss on others
until should rhyme with lap
ing and then rhyme however we need another ing (en) sound instead of "scars"'
but your last rhyme couplet works with dead and cremated.
So thinking, yes, you wrote it, now, got it down, how to push it around to get it to "work"
At this point you can address your poem on three points
1. does it say what I want?
2. does it follow the rhyme scheme?
3. does the meter work?
You have a few problems with each of these things (as everyone does when writing something).  Don't stop writing because you know it's imperfect.  Start with what occurs to you.  Then start picking it apart. Fixing poetry is part of the puzzle of it.  It's like finding the right path for circuitry, or figuring out crossword puzzles, it's an odd art of composing by fix.  So think of it as inspiration, and then fixing.  After you've fixed for a while, you might edit as you write but this isn't Mozart's work here.  He apparently heard it perfectly and had the skill to write what he heard. But that's a gift like photographic memory, it doesn't apply to genius.  Einstein worked and worked through hundreds of thousands of possibilities before coming up with E=MC2
But as I am here to talk about scheme and meter.  Let's take up meter next.
Here's your poem broken into feet. The good news is each of your lines has ten syllables. In much of modern poetry counting syllables is quite good enough.  After you learn the rules, you can certainly break them by using this method for expressing "your voice" but for now let's be slavish to the rules.  I have broken your poem into feet by the straight lines and pointed out the heavy stresses by using all caps.
Pale HUED |GAR ment,| I | ted ON| your LAP | -
HANDS PLUCKED| OUT MY| , GRIEF| and des|PAIRing|
EC hoed| in the |, MU ting| TEARS, un| TIL
WALLS, |ways, more| WALLS were| i | SAW, then|
Your HANDS| CLAWED my| FACE, BRAND|ing ME| with SCARS
Un |thy and| UG ly,| I SHRIV|elled DEAD |
LONG be|FORE my| BOD y| was |mat ed.
Now it's true some words will change their stress in relation to the words they're sitting next to, but it's useful to check with the dictionary for where the heavy stress on a word falls.This is how your poem scans.  Your first line is pentameter except for Garment. You can fix this (if it's what you want to say easily) by substituting a synonym for garmentthat is iambic rather than trochaic.
It would read like this:
Pale hued attire, I rested on your lap.
That is perfect iambic pentameter. (but attire might not be the perfect word. That's up to you.)
Your next line is pretty rare.  Somehow you've managed to write a whole line (nearly) of spondees.  Wow! with one foot of pyhrric ...my!
Here we have to get more specific about what you mean to say.  You have put this so vaguely that it leaves the interpretation to the reader but that isn't optimal here.  There are other ways to achieve poetic ambiguity.
So not knowing what you're saying here I'll write
Your hands then plucked my eyes their grief, despair
and I'll continue, if I may, as you can see the scansion above, ok? (However you have to think you are addressing a garment and it's not likely to have "hands" so it might not make sense. You could change "Your" to "My" but would you "pluck" your own eyes?  That seems not quite right because later you "see".
So what I think I'll do here (though it is brazen of me to do so) is change your poem and write it through my interpretation.  Here's what I came up with.  It follows the scheme, it is iambic pentameter and it solidifies what the subject is and the experience although clearly it may be 180 degrees from what you meant to say.
Thanks Gay for the valuable lessons ~
picture credit:   http://silent-musings.tumblr.com/post/7474308128
Posted by Scarlet at 11:40