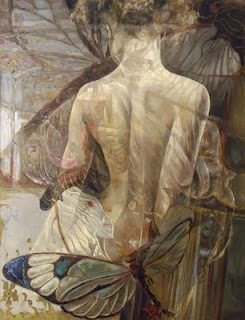 she swallowed her tongue
soft voice, though stuttering
she hid her lies behind the veil


she wiped her crimson nose
hair swept up in a bird's nest
in her finery, she felt her nakedness & shame


oh if only she could, she would
break the silver glass of the caste ceiling
and return the dowry, and bouquet of flowers


the family jewels weighed heavily around her neck
her body was but a debt or maybe a price
a pawn for a rich man but a stranger, sealed her fate


she took a step, haltingly, to open the door
mind wallowed, hands trembled
now.....pushing another step, then another

she stumbled and fell, splitting lips
tongue tasted the blood of freedom
hands touched the dirt on the ground


she pushed herself up to stand
gown soiled and torn at the edges,
she ran, finding her wings at last


Author's note :  Generally, in Japan dragonflies are symbols of courage, strength, and happiness.

This post is my heartfelt wish for women who wants freedom and independence.  Offered for One Shot Wednesday and Friday Poetically of OSP.   Sadly, Brian Miller is hosting this for the last time and will be moving to another community.   Thank you Brian for all your hard work in OSP.   Fly freely and courageously ~